Early action and early decision, what are they? And how do they affect your college application? Do they increase your chances of getting accepted into colleges? Find out all of these and more in this article and be armed with the knowledge that will facilitate your decision for applying to college.

So, you are fresh out of college or a final year high school student and want to start applying to colleges. You have put out your list of schools and the area of study you want to pursue at these schools.

If you are in the latter situation, you must have been doing a lot of brainstorming for the past few days or weeks. And if your situation is the former, do not worry, you will soon understand what is going on. Whichever situation you may be in, this article is well-detailed to offer you clear and concise answers and in the end, you will be able to make the best decision.

If you haven’t picked out a school yet, we have some helpful guides for you. If you are interested in art, you can check our art colleges in the US or culinary art schools if you want to earn a degree as a professional chef. Interested in business? Why don’t you look up on the best business schools in California and start putting your list of schools together?

This blog post compares early action vs early decision so that prospective students can pick an application option that suits them best, after all, they both are beneficial admission strategies, but only if prospective students know how to navigate these routes. The first step begins with understanding the differences.

What is Early Action?

Clear and concise, as promised, we start with the meaning of early action.

Early action, just as the name implies, simply means a type of admission process offered by some institutions for admission to colleges and universities in the US. And if this isn’t clear enough for you, here is how the National Association for College Admission Counseling defined early action.

Early action, according to the NACAC, means that students apply early and receive a decision well in advance of the institution’s regular response date. This early action plan also allows you to apply to many colleges.

The following is a list of some top schools that accept the early action admission process:

These are some of the popular early action universities.

Early action is not binding, this means that applicants are not bound to attend a college that offers them admission. When accepted, to an early action university or college, you can reject the admission if you wish, also, you can apply to as many colleges as possible and attend the one that suits you best.

The non-binding nature of early action is its major benefit to prospective students because it gives them the chance to compare as many schools as possible and take even more time, as long as a few months, to make a final decision.

Another benefit of early action is that it allows applicants to take a more informed financial decisions. For instance, if you are offered admission by two schools, you have the option to choose a school that provides a better financial package like lower tuition fees, grants, scholarships, bursaries, etc., and choose the one that suits you best.

The major con to this decision process is that you will spend more money and time applying to various schools.

What is Early Decision?

According to NACAC, early decision is a process whereby students commit to a first-choice university or college where, if admitted, they definitely will enroll and withdraw all other applications. Unlike early action, an early decision is binding. You cannot apply to multiple colleges and any college that accepts you is where you MUST go.

Some of the benefits that come with early decisions are that you get to save time and money submitting applications to multiple schools and you also get more time, once you get accepted, to look for housing and prepare for college. The con is that you will accept the financial package of the school no matter how it is.

Below are some of the best universities and colleges that use early decision policies:

At this point, you must have understood early decision vs early action and should be able to know which one to go for by the pros and cons provided. However, I have still gone ahead to offer more details on which of the admission policies you should go for. 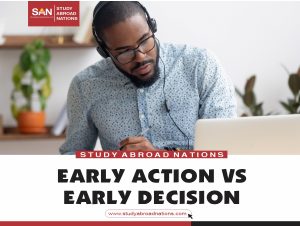 Early Action vs Early Decision: Which Should Applicants Choose?

If up to this point you are still confused about which of the admission process you should go for, the guide under this post will offer you a more concise direction after reading it. Below are some questions to ask yourself to help you decide on whether to apply early action or early decision to a college.

For students who are competitive applicants and have a good recommendation, a high GPA, a demanding course load, a well-written personal statement, and (if required) competitive SAT/ACT scores, early admissions processes, particularly early decision, work best.

Check the website of your preferred school to see if you are competitive. Early action or early decision can be the best course of action if your high school GPA, class rank, and standardized scores are higher than those required by that college’s first-year profile.

·       How Much Aid Does The School Typically Provide?

Before submitting an early action or early decision application, you should also think about the typical or anticipated financial assistance package for the school. While early admission institutions work hard to create a package that best fits your family’s financial condition, some have more substantial endowments and may thus provide more appealing packages.

Also, keep in mind that while applying for early decision, you are not permitted to compare aid packages; therefore, make sure beforehand that the institution should be able to provide you with adequate aid.

·       Have You Given Yourself Enough Time to Complete Your Application?

Gathering your application documents earlier than if you had applied regular decision is a benefit of applying early to one or more colleges. Take a look at your fall calendar and think about any challenges you might encounter in submitting your college application by November.

·       Which Early Admission Programs Are Available at Your Target Schools?

When deciding whether to use early action or early decision, you occasionally don’t get much of a choice. Only one of the two is often provided by colleges and universities. Nevertheless, certain institutions, such as Northeastern University and the University of Virginia, provide both early action and early decision options.

[sc_fs_multi_faq headline-0=”h3″ question-0=”Does early action increase the chance?” answer-0=” Early action does not increase your chances or odds for you to get accepted. It simply gives you to chance to find out sooner whether you were accepted or not.” image-0=”” headline-1=”h3″ question-1=”Do early decision applicants get scholarships?” answer-1=” Yes, you can get a scholarship but your chances of getting a merit-based scholarship are low.” image-1=”” headline-2=”h3″ question-2=”Can I apply for EA and ED at the same time?” answer-2=” Yes, you can apply for EA and ED at the same time but you have to ensure that none of the schools you are applying to have Single Choice or Restricted EA that specifically says that you should not apply to other schools EA or ED if you are applying to that school through EA.” image-2=”” headline-3=”h3″ question-3=”What is restrictive early action?” answer-3=” Restrictive early action is similar to an early action plan in that you can apply earlier than other applicants and receive your decision earlier than other applicants. The difference is that you are not allowed to apply to other early decision or early action universities except public universities and this is because public schools make take longer to make a decision.” image-3=”” count=”4″ html=”true” css_class=””]