The most expensive universities in Canada have one common denominator: their emphasis on high-quality education inputted into their students.

The most expensive universities in Canada are not tagged so just because of the fees they charge, but also for a lot of other offerings that are benefitted by students enrolled in them. This characteristic is one of the prevailing traits in the world’s top institutions including the finest art schools in the UK.

To simply explain this, students will move to distant places from their countries of birth and residence to further their education in institutions that have the reputation of providing world-class education and educational services, this is one of the major provocating factors in the rise of students in the various Austrian Universities that accepts international students.

The quest to satisfy the needs of getting the best quality education—ignoring the costs to a certain extent especially when the student or their guardians can afford it—is on par with the gold rush which occurred in the Midwest of the United States.

No one loves being left behind, especially those that are determined to make their lives better than what they met during childhood. For this reason, a lot of students have gotten themselves enrolled in any of the finest Greek Universities designed for international students.

The quest for quality education boils down to self-improvement on one part and having a great career path or access to one which will place the student at an added advantage compared to the rest, and there are several opportunities for graduates of mechanical engineering to earn top pay just after graduation.

With that said, I present to you the; 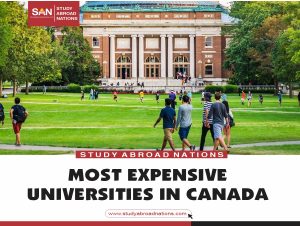 7 Most Expensive Universities in Canada

One of the costliest universities in Canada is the University of Waterloo. It may be found in Ontario’s Waterloo. It was founded as a public university in 1957. Here, there are several undergraduates, graduate, and doctorate programs available. In comparison to other affordable institutions in Canada, the cost at the University of Waterloo is expensive, including all tuition fees and housing. There are 4,375 postgraduate students and 26,987 undergraduate students enrolled in this program.

Undergraduate health sciences students from abroad must pay termly tuition of $10,010.00. Undergraduate engineering courses cost between $7,202.00 and $14,414.00 each term in tuition.

A private institution, Trinity Western University was founded in 1986. One of the priciest colleges in Canada offers courses in art. Both domestic and foreign students must pay expensive tuition at this Canadian university. There are over 1200 courses offered here. There are 45 distinct academic certificates and specializations offered by the university.

With the number of credits taken into consideration, Trinity Western University calculates the tuition charge for overseas students.

started in 2007 The costliest university in Canada is Quest University. It is situated in Canada’s British Columbia. It is a private institution and charges the highest tuition for students from abroad. The education offered here is of the highest caliber.

The annual international tuition fee at Quest University is $41,335.

Having built a reputation for all of its 31 years of existence, Mount Allison University has been recognized by many authorities in education as one of the best primarily undergraduate universities and categorized as one of the most expensive universities in Canada.

One of the major players responsible for this categorization of the university is MacLean and Mount Allison University is able to boast of being a winner of this award 22 times; this is a feat that remains unmatched by any other university in Canada.

Mount Allison offers intending students more than 50 academic programs that they can choose from and create their own unique degrees. Also, it must be added that this is the most expensive university in Canada for undergraduate students, below is a look at the different tuition costs per program type available to students.

Having been established in 1995, the Royal Roads University has down the years remained among the top tier universities that can be found in Canada. It is an accredited, publicly funded, and applied research university that is based in British Columbia province.

The most expensive universities in Canada have built a fascinating reputation for being true to bringing the best out of students while instilling discipline and developing their creative spirit. Enroll now.