Film schools in Canada are held in high esteem all over the globe as they have consistently produced award-winning graduates in the film industry. This post highlights the best schools you can enroll in to join the queue of talents changing narratives in the film industry, and contributing positively to society.

Whether you aspire to be a screenwriter, sound editor, cinematographer, costume designer, etc., these schools give you a head start and take you by the hand to attain your dreams. You can enroll in any of the cities thriving in the film industry like Quebec, Toronto, Montreal, Vancouver, Ontario, and British Columbia.

Some time ago, I was telling a friend that a filmmaking degree is one of the college majors that pay well. He was surprised. That sounded to him like a weird degree to get in college, but he was not well informed. As a matter of fact, from 2018 to 2019 according to the motion picture association, the film industry generated a GDP of about $12.8 billion for the Canadian government with about 181,000 employers.

This is to say that the argument of “is getting a film degree worth it?” has been settled. Just like London film schools, the Canadian film schools offer a wide range of degree programs in filmmaking, ranging from fast-track one-year programs to BAs, BFAs, Mas, MFAs, PhDs, and so on.

Upon your graduation from film school, you are open to many job opportunities such as working in journalism & advertising brands, production studios, visual effect companies, and many others.

Pay detailed attention as I explain the best schools in Canada from which you can get a film degree. Also, look up this article on certificate media online courses if you are interested.

What Is A Film School?

I am sure at this point that you have gotten enough insights into what film school is all about. But let me give you a proper definition. A Film school according to Wikipedia is an educational institution dedicated to teaching aspects of filmmaking, including subjects such as film production, film theory, digital media production, and screenwriting.

Is Canada A Good Place To Study Filmmaking?

Yes, of course. Canada houses the best filmmaking schools which have produced award-winning graduates, and great actors who are changing narratives in the film industry.

What Is The Cost Of Film Schools In Canada?

The cost of Canadian film schools differs according to the type of degree pursued. For the 18 months of FP diploma programs, the fee is about $38,060, with an additional international fee of $19,982.

How To Get Into A Canadian Film School?

Here are the steps in which you can enroll in a film school in Canada.

Without further ado, let’s delve properly into the best film schools in Canada. 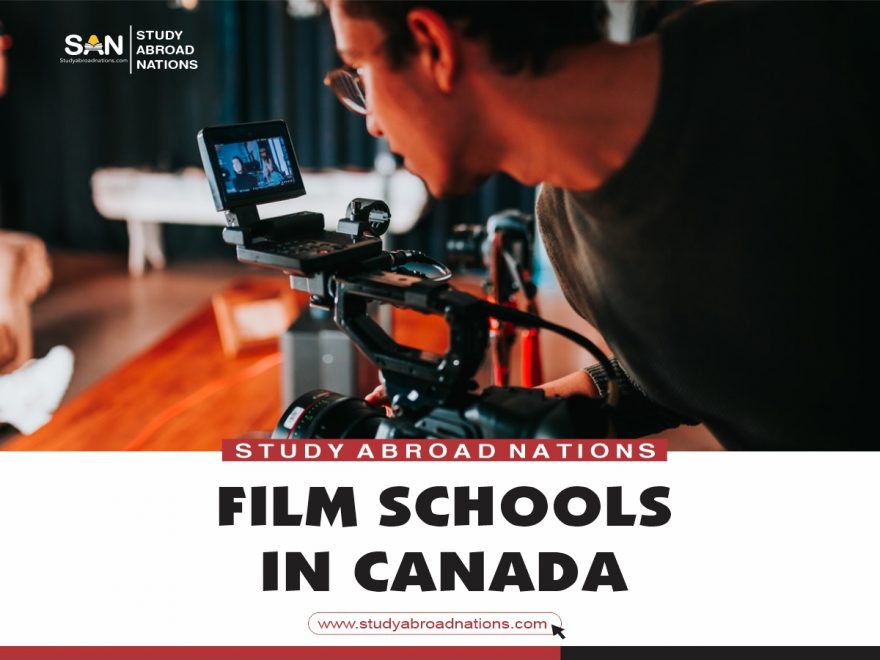 Follow me closely as I list and explain these schools. Our data is gotten from deep research about the schools on sources like course compare, careers in film, and individual school websites.

Ryerson University is one of the best film schools in Canada, located in Toronto. The school focuses on giving the students practical skills needed to work in the filmmaking industry or gain entry-level jobs in the media space. The students

Through Ryerson University’s School of Image Arts, the students learn from professionals in the industry, and they explore courses such as writing, film production, film theory, film technology, art direction, editing, cinematography, and many others.

The program helps to nurture personal visions that will in turn contribute greatly to Canadian society and the world at large. It is also good to know that in the third year of study, students can choose the integrated digital option and focus on digital media.

Another on our list is the University of British Columbia which is among the top public universities around the globe. The school through the Vancouver campus equips students with the skills and imagination needed to thrive in the filmmaking industry.

The students explore courses such as introduction to motion picture directing, cinematography, motion picture sound, film and media production, post-production techniques, etc. It is a four-year program upon which students are awarded a bachelor of fine arts degree at graduation.

Apart from producing innovative artists and actors who are changing narratives for over 50 years, the University of British Columbia is North America’s most international university.

York University is another famous film school in Canada that focuses on giving the students the practical experience needed to thrive in the filmmaking industry. The school provides internship opportunities, field placements, exploration of diverse career options, partnerships with other creative industries, and many others.

The courses are handled by award-winning professionals, and the topics taught range from editing to cinematography to operations involved in storytelling, screenwriting, social engagement, etc. The duration program is four years, and the class size is below 25 students to give room for personalized coaching sessions.

Fanshawe College offers a graduate certificate program in filmmaking. It is regarded as one of Ontario’s largest filmmaking colleges, with four campuses and over 43,000 students yearly. The school focuses on equipping the students with practical skills needed in the film and television world.

The program is an advanced hands-on filmmaking program that explores the technical and artistic aspects of documentary and narrative filmmaking. There are also internship opportunities with the college industry partners.

Upon graduation, students are awarded both a Bachelor of Arts degree with a major in film studies and an Ontario graduate certificate in advanced filmmaking due to the collaboration of Fanshawe College and Brock University.

The school offers two programs- the Bachelor of Film and Media production program which runs for eight semesters, and the advanced diploma in film and television production which runs for six semesters. All programs are taught by industry experts to ensure quality education.

This is another one of the Canadian film schools which aim at providing technical training and skills development in cinema studies and history. The school accepts only 24 students out of many applications in order to ensure personalized coaching.

The program has three options to choose from- Major in Film, Extended Minor in Film, and Minor in Film & Video Studies. The film program is carried out in the school for the contemporary arts in downtown Vancouver, Burnaby, and Survey.

Vancouver Film School provides a year graduate diploma in film production, where students are equipped with in-depth skills across the key disciplines of filmmaking which are producing, cinematography, production design, directing, and post-production. Students explore these five areas and can choose to major in about two of the five programs.

The courses are taught by industry professionals, and upon completion, students are given access to the school’s alumni directory where they can network with experts to help them launch their careers successfully.

The next best school in Canada that offers filmmaking programs is the Trebas Institute. This school is a private career college that aims at equipping students with the knowledge and skills needed to thrive in the entertainment industry.

The students explore filmmaking courses, and essential equipment such as cameras, green screens, audio and lighting equipment, editing software, etc. The students also carry out projects such as producing short-duration films, television broadcasts, web series, and many others.

Trebas Institute is known as one of the top centers of filmmaking in North America and has been in existence since 1979.

Concordia University offers filmmaking programs with small class sizes (not more than 60 students) to ensure adequate mentoring. The school offers both Bachelors and Masters of Fine Arts in Film Production.

George Brown College is among the best Canadian film schools with a focus on equipping students with practical skills needed in increasing the growth of the mobile entertainment and gaming industry in North America.

As someone interested in the entertainment industry, I can say at this point that you have been provided with the best schools that offer filmmaking programs you can enroll in Canada. I do hope you make the most of the details provided.

Here are the FAQs about Canadian film schools. I have selected and answered the vital few.