Studying and having fun promotes a healthy academic and social lifestyle in students. There are party schools in California where such a lifestyle is actively encouraged. These schools are highlighted in this blog post to give you varieties of options to apply as the college year approaches.

Some of the leading universities in the US and in the world are situated in California like Stanford, UCLA, Caltech, UC Berkeley, USC, and many others. The academic qualities in teaching and research of these higher institutions precede them. Every college student, anywhere in the world, knows how serious the academics here are but that is not all the case.

The universities in California are not just about study and academics as it may seem to you, they organize parties and promote other social events to develop and enhance the social skills of students. The US education system embeds the cultures of party and study and most of these top schools are at the forefront of promoting these events.

Balancing studies with fun is a real deal, it brings togetherness, students can interact and know their surroundings better, and it is a better way to reduce depression and other mental health issues found in students. Organizing events where students can play games, drink alcohol, have fun, and frolic helps loosen them up a bit from the stress of college life.

As a prospective student looking for a party school in California where you can study for the next 3 or 4 years and still have fun with your friends, we have a long list of schools for you to pick from. You can also explore other options as well, like the art schools in California for prospective students aspiring to pursue a degree in an art discipline.

What Is A Party School?

The term “Party School” is used to refer to colleges or universities known for having a large number of students who are often partying, drinking alcohol, and abusing drugs but spend little time on their academics. They are also known to organize a lot of parties and other events to boost the social skills of students.

Attending a party school can be fun, you will always have a fun college experience to look back to. Some of these California party colleges and universities accept international students as well. If you are looking into it, you should get acquainted with the necessary guidelines to study in California before applying to any of the colleges.

Ironically, these party schools in California turn out to be some of the best universities in the country with international recognition too and the list we have put together will wow you but before we continue, you can also check other interesting, helpful articles we have published.

Like the one on alternative careers for mechanical engineers and if you don’t want to pursue a degree before getting a job, you can just take one of the short courses that lead to a good job. Have you heard of weird college degrees? You should check that one out and be wowed. 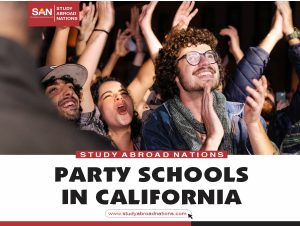 Through findings from personal research and data from The Princeton Review and other verified sources, we have drafted a list of the best party schools in California for those aspiring to get into colleges with great social environments. With the information here, you can easily decide which of the schools is best for you.

Listed in no particular ranking order are some of the best colleges in California referred to as party schools:

Commonly referred to as Chico State, this university is one of the party universities in California. It is a public university known, not just in the state but in the whole country, for its strong party lifestyle and was once featured by Playboy ranking top on the list of party schools.

Lynn McDonald, a former psychology professor at Chico State who worked there for 30 years (1983 – 2011) commented on Quora concerning the school’s party life that classes were seriously empty on Fridays because there, the weekend begins on Thursday night.

He also added that during his tenure, students would get seriously mad when lecturers think of giving an exam on a Friday. However, there were other comments from recent graduates – 2012 and above – that agreed that the school has changed and its partying and alcohol abuse have greatly reduced. If you want to read more comments on Quora about Chico as a party school, click here.

UCLA is a popular higher institution in the US known for its quality academics in the areas of teaching and research with a long-standing reputation for being a party school. It also has a reputation of being one of the best schools in California for premed and is common among students who want to pursue a medical degree.

UCLA is mostly considered a party school because of its strong athletic presence, frat system, and accessibility to bars. Also, because it is a large school with a massive and diverse population of roughly 30,000 undergraduates, many students can cluster for parties compared to smaller schools with a 10,000 -15,000 student population.

San Diego State University is a public research university with roughly 36,000 students enrolled. It is large with a diverse population of students known for its nightlife. Newsweek ranks SDSU among its list of top party schools in America and Playboy Magazine has consistently named it one of the top party schools in the country.

There are tons of clubs around the campus with raging parties almost every night of the week, there are also frat/house parties held on campus. One of the major attractions of the school is its affordability. It is one of the cheap institutions in California.

4.     The University of Southern California (USC)

The University of Southern California or USC is a private research university in LA founded in 1880 and known to be the oldest private research university in California. It is one of the country’s most competitive colleges and, according to CBS, one of the top party schools in the US as it ranks 4th on Playboy Magazine’s list of top party schools in America.

From comments on Quora concerning USC as a party school, most people believe it is because it is a private school with rich kids who do not have to worry about money that is why there is so much partying done there. However, this does not cover the fact that USC is one of the best universities offering excellent programs at undergraduate and graduate levels. One of the best computer science programs in California is offered at USC.

5.     The University of California, Berkeley

UC, Berkeley, or UCB as it is commonly referred to is a public research university and one of the widely recognized party schools in California. In the comments in a Reddit post where someone asked if UCB is a party school, many responses affirmed that it is but one comment that stood out the most is from a user that replied saying “we have parties very often, in fact, twice a week: homework party and project party”. This comment alone gathered 62 upvotes, the highest of all comments including the main post itself.

So, this confirms that the UCB is a party school and has a bustling school life. This does not diminish its academic prowess in any way as it is top-ranked among the list of schools with the best engineering programs with scholarships in California, a great attraction among prospective students.

San Jose State University is one of the older California universities and the founding campus of the California State University system. It is a public institution therefore there is a massive, diverse student population. From the responses I gathered from comments on a Quora post asking whether SJSU is a party school, most agreed that it isn’t and it is mainly whatever you want it to be that the school becomes for you.

Others also commented saying, it depends on the people you know, especially frats and sororities who throw parties almost every week. SJSU is right in Silicon Valley, so there it presents an atmosphere of high achievers and fierce competition, especially among business students.

UC Santa Barbara is a prestigious public university recognized among the leading universities in California for Biology and also as a popular party school. There is a lot of partying here during the weekends according to our findings and even the Princeton Review ranks the institution among its top 20 party schools in the US.

8.     The University of California, Santa Cruz

UC Santa Cruz has a dull party scene, of course, you can party with friends but it is not wild even a Greek party presence scene is not active and is mostly ignored by students. Its location contributes largely to this as it is located in the redwood forests and meadow, so the bustling city life is missing which in turn dulls the party life.

It is still a party school but compared to the others on this list, its party scene is nowhere near the other schools.

These are the top party schools in California for prospective students who want to study somewhere they can have a lot of fun and create unforgettable college experiences when they graduate.