English Universities In France has made studying in France possible even without being fluent in French. So, if you thinking of studying in France but are worried that language will be a barrier, then, I indulge you to engage well with this article as I show you the top English universities in France.

With these English universities in France, you may have no need of visiting TOEFL test centers to take any language proficiency test as far as English is your first language.

Sometime back, going to any country to study means you are proficient in their language or ready to learn for you to scale through. You could see people making use of English teaching websites or looking for ways to improve their accent in English, all these are just to be eligible for studying in any English-speaking country.

But today, the presence of English-teaching European universities has opened doors for international students who are just fluent in only English to explore the country. The same applies to Canada which has a list of English universities in Montreal, Canada.

France is a country not just known for its artistic culture or tourist centers, but also for its exploits in the academic field. This is why many people look forward to enrolling in any of their colleges. Popular men and intellectuals who are changing narratives and bringing innovations were products of the institutions in this country.

However, just like I was telling you above, one of the challenges holding people from applying to schools in France is the language barrier. This challenge is what I have found the solution for it by compiling the top English universities in France.

Whether you learned how to speak English online as a Korean and then used a free online English test to ascertain the level of your knowledge, having a background knowledge in English is just all you need to apply to any of the English universities in France as all their lectures are being taught in English.

Follow me closely as I list and explain the various English universities in France, including the average cost and the programs they offer.

You can also check out our article on the best universities for English literature and creative writing. 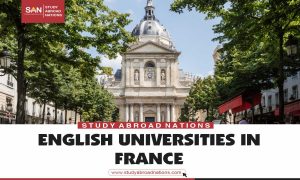 Below is the list of English universities in France, the degrees they offer, and their official website links for application purposes or to explore the school page.

Paris Sciences et Lettres University is one of the English universities in France that offers undergraduate, master’s, and Ph.D. degrees.

The university noted as one of the best English-taught universities is a public institution established in 2010, but became a formal university in 2019. It also has other academic partners.

The university with about 140 laboratories receives thousands of applications from students and researchers annually- undergraduates, masters, and Ph.D. respectively.

The university’s official languages for lectures are French and English. This means that some of the programs are taught in English while some are done in French. Thus, you may need to gain a little knowledge of French to pursue some programs.

Institut Polytechnique de Paris is also one of the English universities in France that offer undergraduate, master’s, and Ph.D. degrees.

Institut Polytechnique de Paris which can also be called the Polytechnique institute of Paris is a public university and comprises five top engineering schools in France. These schools have made major development in the field of science and technology in the past centuries.

Studying a program at the Institut Polytechnique de Paris exposes you to high-quality education in engineering, a coordinated environment for research and culture, and a degree recognized globally.

The university’s official languages for lectures are French and English. This means that some of the programs are taught in English while some are done in French. Thus you may need to gain a little knowledge of French to pursue some programs.

The institution offers only three bachelors of science or undergraduate programs which can be completed within three years. However, there are various Ph.D. programs, master’s programs, doctoral studies, engineering programs, lifelong learning programs, summer schools, etc.

Paris Institute Of Political Sciences (Science Po) is among the English universities in France that offer undergraduate, master’s, and Ph.D. degrees.

Paris Institute Of Political Sciences popularly known as Science Po is a private institution founded in 1872 that accepts international students through exchange programs that gives room to study in the institution for a semester or more.

Aside from the exchange program, Sciences Po welcomes students from around the globe. The reason the school attracts many students is that it is among the top educational institutions which offer many English-taught programs. Even those who are not fluent in French can learn the French language and culture amidst studying at the institute to earn their degree.

Also, the graduate students can enroll in the master’s program or the dual master’s program like the dual bachelor’s degree, and stand the chance of graduating from two schools upon completion. There is an English-taught Ph.D. degree in economics program for Ph.D. students in the institution.

Universite de Paris is one of the English universities in France founded in 2019 by the coming together of Paris Descartes, Paris Diderot (VII), and Institut de physique du globe de Paris. It is a public institution that offers undergraduate and master’s degrees and is regarded as one of France’s best institutions globally.

The institution offers many English-taught degree programs, however, in some cases, there are courses taught with a combination of both French and English such as the bachelors in frontiers of life sciences. The programs taught only in English include master’s in biomedical engineering- bioengineering and innovation in the neuroscience program.

Universite de Paris is a member of the circle U. European University Alliance, a union of universities across the continent that is dedicated to teaching and research, internationally oriented, and multidisciplinary. This union is supported and sponsored by the European commission and investment in the future program.

The American University of Paris is among the English universities in France that offer undergraduate and master’s degrees program.

It is one of the oldest American universities on the continent established in 1962 and has been recognized globally as one of the best English-taught universities in France. The institution welcomes over 1000 students annually from different countries and backgrounds.

The school is accredited in the United States through the Middle States Commission on Higher Education and the Delaware department of education.

The institution even though not ranked like other universities is also recognized by the rectorat de paris as an etablissment prive d’enseignement superieur libre with the right to ouverture.

The university’s official language for lectures is English, but students must show proficiency in French before graduation. The school has many undergraduate and master’s degree programs you can choose from. Some of these programs are courses in history, computer science, international law, diplomacy, global communications, international management, mathematics, psychology, etc.

Do Universities In France Teach In English?

How Much Does It Cost To Study In France In English?